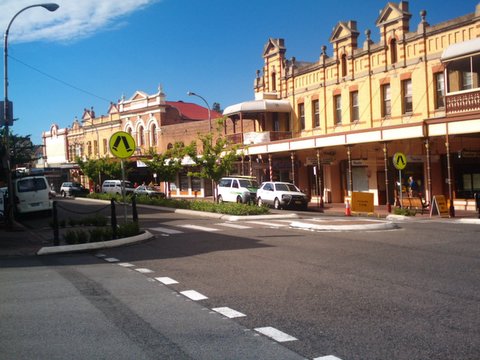 They say that many of Maitland’s attractions have a link with history, but a lot of history becomes sugar coated over time and with hindsight and the advent of political correctness there’s a lot of flip flopping of original opinions and newly found appreciation for people and places that wasn’t there when it was maybe needed the most.
With so much said history, there come moments of a slight morbid irony, let’s begin.

The town of Maitland (as it came to be known in 1829) was originally set up as a convict settlement and was known as the Wallis Plains Settlement in the early 1800s and with it’s great riverside access became a very popular farming and trading town. It didn’t take long for it to rival the likes of Sydney as the capital of New South Wales.
It’s not surprising that the council of today still tries to convince us that business is as strong as it was then, but the lack of customer car parking, the amount of business’s closing and the unnatural amount of coffee shops and dreaded $2 shops replacing good old fashioned business like shoe salesmen, key cutters, hairdressers and chemist seems to tell many that the heritage and old fashioned charm that made Maitland what it was, may soon become history in itself. Thus likely to become a slab of office buildings and lattes for all.

That said, Maitland is still a very beautiful place, and you can see that we are still trying to hold on to some of its old fashioned charm. When you walk down the Mall section of High Street on any given day, you will soon realise it is the same High Street that had trams and bullocks travel down it. It is the same street that experienced the famous 1955 flood and knowing that this very same business district was originally a place for convicts to hang out, you can be forgiven to think that there’s still a few trading today. Picking them is half the fun.
Although Maitland has some of the best farming and tourist friendly eye candy, it’s performing arts and visual arts are also getting recognition. It doesn’t take Einstein to work out that the Maitland heritage, history and attractions from a tourism point of view can be broken up into five main parts:

The Maitland Gaol
Defunct since 1998, the place was regarded as one of the toughest places in .Australia with it’s biggest claim to fame was it housed Ivan Millat. It is now one of the towns most popular tourist attractions, with guided tours on a regular basis, day and night.

The Sporting Legend Les Darcy
The Maitland Wonder as he was called. The problem was, when he decided he didn’t want to join the war, he darted off to the U.S and basically the Australian public called him a coward because of it. Yet, like most great people, it wasn’t until he died that he was appreciated for his past actions and all was forgiven. The man they called a coward who was proud of his country and his town, now has a statue in his honour and the only things shitting on him now are pigeons.

The 1955 Flood
It was big and it was wet, even after so many years, they still talk about it. They still have level indications on just how high the water got in various streets and it’s an amazing realisation when you see them.

The Steam Fest
I was once told that not too long ago, the powers that be in Canberra revoked Maitland as a heritage town, because it wasn’t “heritage-y enough”. This could explain how that angle isn’t promoted as much anymore and the heart of steamfest aka Maitland Train Station got the million dollar high tech space age looking facelift that it got. The good old fashioned feel of Maitland station is now a thing of the past too, and with it, I feel, what steamfest was all about. It happens once a year in April and I feel it’s dying out. Like a lot of things, the local council really doesn’t go out of it’s way to push a lot of community projects and could be a very good reason why the local radio station went the way it did.

The Little Black Boy
The poor little black boy, once a major symbol of historic Maitland, doesn’t even get a mention anymore. He’s still standing in his old place. He has been stolen and replaced, he’s been faked and used to honour losing rugby league team dares, But for some reason doesn’t get talked about and seems not to be appreciated anymore. Our little indigenous friend isn’t featured on council letterheads or any other promotional material for our town, not even a bumper sticker. Is someone in the council racist?, Are we run by white supremacist? Or has good old political correctness reared it’s ugly head? Maybe the notion of promoting a young black slave boy isn’t something Maitland wants to be proud of, I for one can see the funny side in it, and I think anything that promotes our indigenous appreciation and child labour should be something to share.

But in all seriousness, the population of Maitland, has clocked up to around 63,000 people, so it says something about what kind of place it is here. There are some really nice people here and of the traditional
businesses that are still here, they are all nice people and will love to have a chat to you. That’s 63000 different faces, opinions, and if your lucky like me, 63000 thousand chances of hearing a great story, secrets and wisdom all about the town, that, warts and all, I do, love called Maitland.

Come and visit us anytime, the people are great most year round. February is a bad time for business folk so try and be nice. Theres so many different coffee shops and by the time you read this, maybe even a Starbucks may have made their way here. One thing I have noticed it’s hard to find a coffee shop that is both comfortable and has a great tasting coffee. You can have one or the other. The pubs here are fan-bloody-tastic and have some really nice live music. The cinema seems to only show the biggest blockbuster films, so anything that has subtitles won’t be even talked about at the cinema. The video shop is a little dingy but they know what they are talking about. There is also a great old fashioned bookshop that sucks you in and you won’t leave until you buy something.

The best bet to come and visit is on the first weekend of every month, because on Sundays we have a marketday at the showground and it’s been a very popular thing for quite some time, and because Maitland is central to towns such as Morpeth and Cessnock, with just a few minutes in the car, you can be in wine country in no time.

Flop It Out, Lets Get It Over With

Subway And Their Subliminal Onions